It’s been over a year since I tried to make sense of the number of 360 and F430 cars on our UK roads (see here and here).  I was recently contacted by Jonathan Tremlett who provided a bit more insight into the numbers.  He has kindly allowed me to re-post his comments here…

Firstly, I have the same UK 360 import numbers as you and have the following for F430: 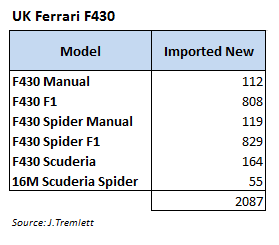 Now the above figures came from adding up the annual figures given to me by Ferrari UK. But separately I was told there were 876 Berlinettas and 995 Spiders imported. I pointed out the discrepancy but never got a sensible explanation for it.

I have also spent some time looking at the DVLA figures which I believe are the same you have looked at from VEH120, VEH121 and VEH160. I have never managed to entirely reconcile the figures either between the three spreadsheets or with my own records. I think I can, though, account for a little of the anomalies:

Firstly, with regards to 360s, not all are listed as 360s but rather a number are under ‘Missing’ model. So, for example, the latest version of VEH120 (licensed vehicles by make and model) shows 858 360 Modenas (no split between Berlinetta, Spider, Stradale) registered in Q2 this year and 3939 ‘Missing’ model Ferraris. An indeterminate number of those will be 360s. For some reason, Ferrari models only seem to be recorded from some point during 360 production. You can see that the 575 Maranello exists as a model on the DVLA datasheets but not the 550, for example. I also extract the anonymised MOT data and see the same thing. That does include engine size and first registration date (not always correctly, it must be said) so does give some clue as to the split of models from that. I have filtered out non-Ferraris. They haven’t yet published 2014 data and also managed to muck up the links between the tests when they put 2013 on. (As you’re probably aware they have just launched mot-history.net which allows you to look up the MOT history for a specified registration).

Secondly, there is confusion over what the DVLA datasets actually contain from a geographical point of view. It isn’t all that clear in their own notes although it does mention that stats for Northern Ireland are published separately (even if the link they give doesn’t work). Anyhow, what I believe happens is that all road cars imported for the whole UK by Ferrari North Europe are registered with the DVLA and so appear on the VEH160 spreadsheet. Mind you, I ought to add that I’m not 100% sure of that because when I look at 599 SA Apertas – which ought to be an easy example because there were very few cars – VEH160 indicates 9 cars in total, one of which was only registered in the first half of this year. Yet I know there were 11 cars officially imported (I have all the chassis numbers) plus one that was sold new to Italy then was registered in the UK shortly thereafter. Still, Ferrari import cars for England, Scotland, Wales, Northern Ireland, the Republic of Ireland and the Channel Islands. I think all those cars appear within the numbers on VEH160 but only those for England, Scotland and Wales, appear on VEH120 (licensed cars) and VEH121 (SORNed cars). I also think exports will include cars that go straight to the Republic of Ireland and possibly the Channel Islands.

Even taking the above into account, I still cannot entirely reconcile the numbers to my satisfaction. You would expect that, for brand new cars, the number licensed (i.e. on VEH120) should be pretty close to the number imported (i.e. on VEH160) at least initially. Yet it almost never is, even taking into account the number SORNed (from VEH121) which is usually very small on a brand new model and allowing for some going to NI, Eire, or Channel Islands.

Lastly, I do know the model split on the DVLA datasets between F1 and manual etc. is not entirely reliable from looking at models other than the F430 so I would be a bit cautious about the F430 splits as a result.