Following on from my post regarding the number of Ferrari 360 and F430 cars registered in the UK, I made a Freedom of Information requested to the DVLA.  The FOI request asked for the number of cars exported in the last 10 years split by make, model and year of export.  To my utter astonishment the DVLA replied six days later.  Not only were they prompt in extracting the data, they actually did as requested.  I can only wish they will turn my documents around with such verve in the future…

Not everything was rosy though.  Here’s what they had to say:

DVLA began recording statistics on exports from 2009. No statistics are held prior to this date. The  information  held  by  DVLA is  provided  in  the  attached  spreadsheet.    These  figures  reflect the position from 2009 to 31 December 2013.

Not withstanding that records aren’t available prior to 2009, the data provided is fairly comprehensive – I have the number of cars exported from the Abarth 500 (167 in the last 5 years) all the way to the Zastava Yugo (just 2). 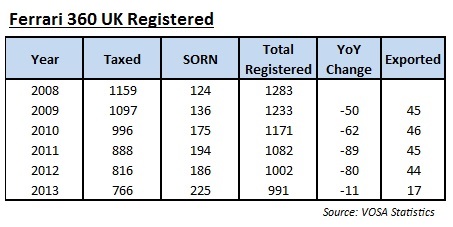 A couple of things jump out of the numbers for me – firstly, in 2011 89 cars dropped out of the official records.  45 were exported which leaves 44 presumably scrapped (I feel another FOI requested coming on).  Secondly, we lost 11 cars in 2013 but 17 were exported – meaning that more 360s are coming back to the UK than going out.  This is probably due to the recent price rise of the Challenge Stradale over here and the appetite for LHD examples being bought for less money on the continent.

Here are the numbers for the F430:

Being the replacement for the 360, the F430 numbers are slightly different over the same time frame.  It is interesting to note the number of exports during and immediately after production.  Does this indicate overseas markets buying new and nearly new cars over here due to the weak Pound?  2013 shows a similar pattern to the 360 where more cars are coming into the country than going out – perhaps buyers are going to Europe to get better value for money?

Since I have all the data it would be churlish not to publish the export figures for all Ferrari cars in the UK.  Here are the numbers… 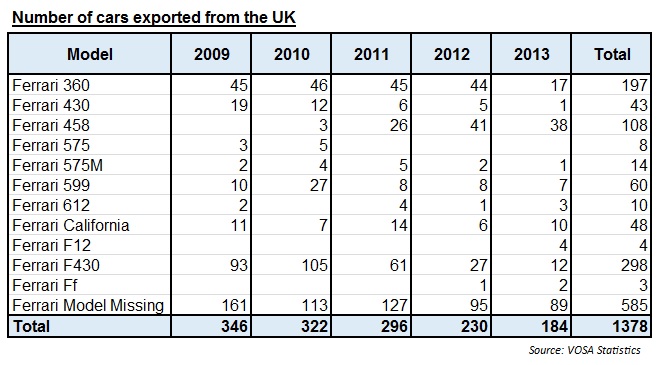 As usual, please do get in touch if you have any questions or would like further information from the data.