Let’s start with the elephant in the room – the 360 spider that is up for sale with JCT600.  For those of you who don’t follow the UK market, the car in question is an ultra low mileage spider offered at an eyewatering £140k.  And that’s after a £30k price reduction in the last 24 hours!  I struggle to see who, beyond a collector, would even contemplate buying this car.  You wouldn’t be able to drive it, otherwise all the *value* would disappear.  Any sane person with this sort of money would be looking at a 458 spider, or perhaps a pair of F430s!  The appearance of this car on the market signifies the madness that is currently afflicting other Ferrari tipos has now reached the 360.

I had thought long and hard about including this car in the data set for fear if distorting the numbers.  In the end I decided to leave it in, for a couple of reasons.  First and foremost, the way I set out the index was to include the entire population (ie: no topping and tailing of the data).  Secondly, due to the very low mileage the car is only affecting the headline index.  None of the detail stats are skewed.

Unsurprisingly, average 360 prices have increased for a third month in a row adding 2.50% since this time last month.  The price index now stands at 124.22. 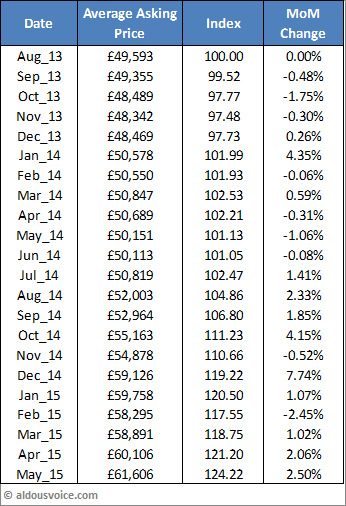 The number of cars for sales has increased by just two but activity remains very robust with 15 cars sold from the data.  However, this number isn’t the complete story as there are quite a few transactions happening off market as well.  Furthermore, the transactions I know about have been good cars going for very strong money.

It would be amiss to not mention the other end of the market as there have been a few cars offered for sale at more sensible money.  Activity in this area has been dominated by the release of the Silverstone experience cars to the market.  These cars were offered with a mere 85,000 (carefully driven) miles for about £33k.

And here’s the plot of mileages vs asking price: 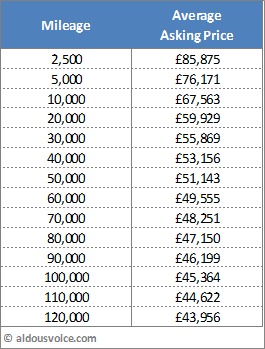 Finally, here’s the big table showing which cars are in and out of the data.  Note that both the Frosts car and the Eagle Automotive one seem to have been sold.

I’ll wrap up with a small warning for buyers – as I travel about I get to see all sorts of cars and it apparent that there are a lot of people chancing their arm with substandard cars offered at top prices.  If you’re looking to buy, please be careful and do your due diligence first.

And here’s an idea for owners: I have helped a few people cash out of their 360 and get into a top spec (Ferrari approved) LHD F430.  In all cases the cost to change has been flat, even once travel and importation costs have been added.  If you can live with the steering wheel on the wrong side then it might be one to ponder….

UPDATE 02/05/15:  In response to the request below, here’s the plot of mileage vs price with the Elephant removed: