Today I was lucky enough to be a guest of the Caterham F1 team during the final testing session at the Circuit de Catalunya. Over the years I’ve been lucky enough to have gained access to some of the finest cars in the world but standing next to an F1 team in full flow has got to have been one of my favourite motorsport experiences ever.

My first hurdle was security – sadly I had to leave my dog, booze and stick of dynamite at the hotel…

I was part of a small group that Caterham were entertaining in their hospitality suite. The people were mainly made up of those connected to their sponsors as well as a couple of blaggers like me. 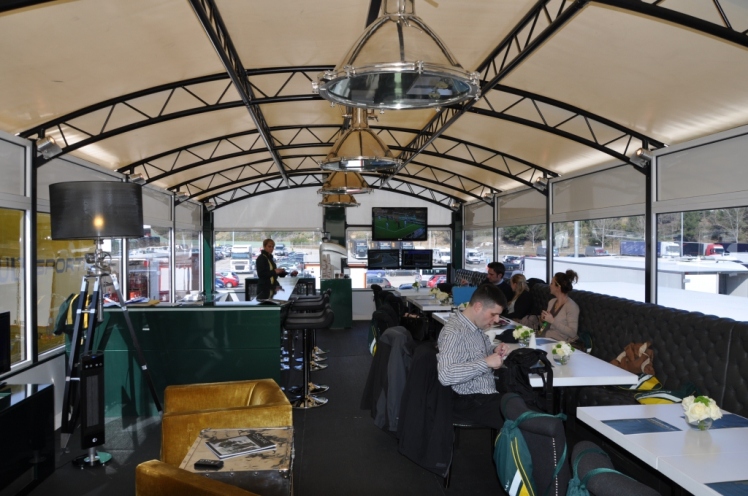 The garage and hospitality suite were made available for our use throughout the day, unsurprisingly I spent most of my time in the garage although I did take time out to consume a rather delicious lunch. During the morning the team ran consecutive tests on different parts and settings, sending the car out for about 5 laps at a time. Parts tested included exhaust outlet profiles, brake shrouds and brake cooling duct blanking plates. One of the more surprising things I saw today was the amount of gaffer tape used in the car. 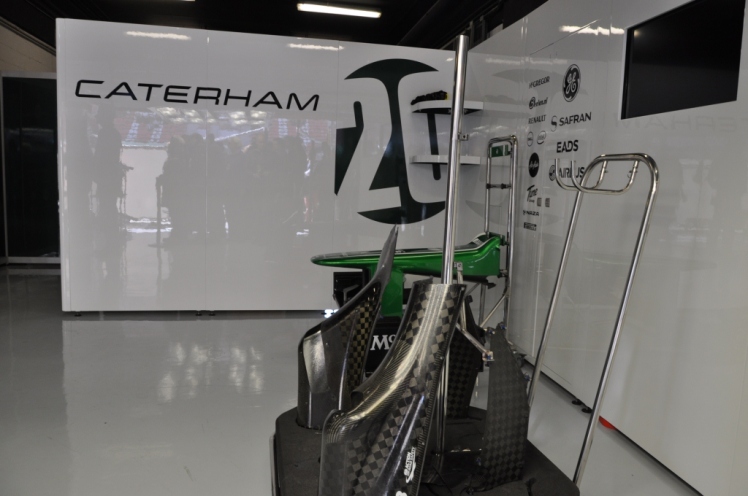 One of the other things I noticed was that every time the car came back to the garage all of the sponsor logos were cleaned and polished. Not really surprising given that F1 is such a commercial sport… 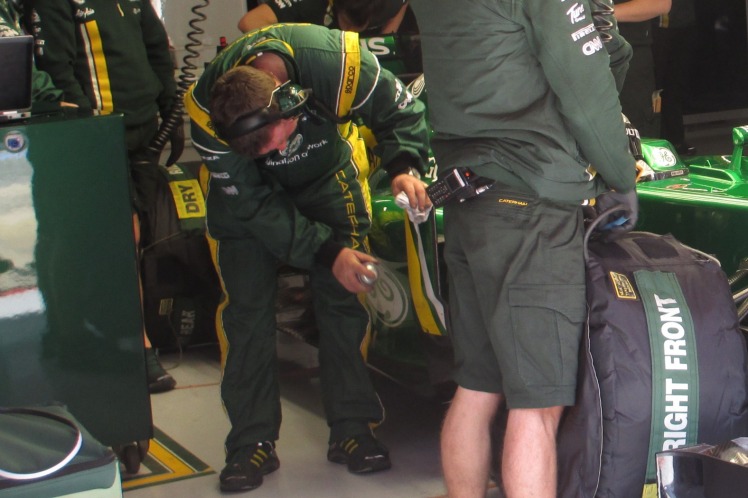 I spent some time with one of the test engineers – he told me that every part on the car was regularly assessed by NDT (Non Destructive Testing). He explained that they had four main methods of testing the parts. The first is to cover the part with a fluorescent dye – once the part had been wiped down, any residue sitting in a crack would show up under a dark light. The next was Magnetic Field Resonance – any cracks in the parts would distort the magnetic fields. He demonstrated Eddy Current Testing by showing me an instrument cluster off a steering wheel and asking me to identify two cracks. They weren’t visible to the naked eye but when he ran his testing probe over the part the cracks soon showed up on the screen and under a magnifying glass they became apparent. Finally he demonstrated ultrasonic testing which is used to detect the de-lamination of carbon fibre. Sadly I was not permitted to take any photos in this area as it contained their data monitoring team.

During lunch we were joined by the drivers who both had earphone mouldings fitted. A small speaker was inserted into their ear and a two part “expoy” was injected over their ear and covered with a piece of clear plastic sheet. They then had to put on their balaclava and helmet whilst holding still for 10 minutes until the glue had cured. 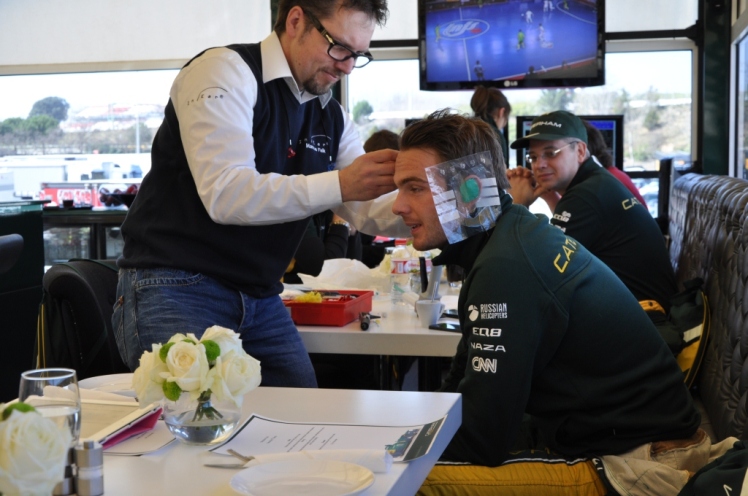 I was also given a short tour of the Pirelli workshop. The engineer told me that of the four dry tyres, the Hard and Soft compounds were designed to work at higher temperatures and the Medium and Supersoft compounds at lower temperatures. He said that they consider the Supersoft tyre to almost be a pure qualifying tyre and that they had to carefully access whether it would work under race conditions.

I asked him if Pirelli altered the compounds during the season but was assured that this was only happened during their first year – in 2012 and 2013 the compounds remain unchanged. He also said that the tyre construction between the dry tyres is also identical.

All the tyres are provided to the teams for a discounted fixed price and are supplied ready fixed to the rims by Pirelli.

Each tyre has a unique number stamped on the sidewall at manufacture in the form of a barcode. This barcode allows the FIA to track tyre usage and to ensure that teams are not using more than their allocation.

There are also specially developed wheel weights that fit on the inside of the wheel – they are thinner in order to allow the wheels clear the brake shrouds. 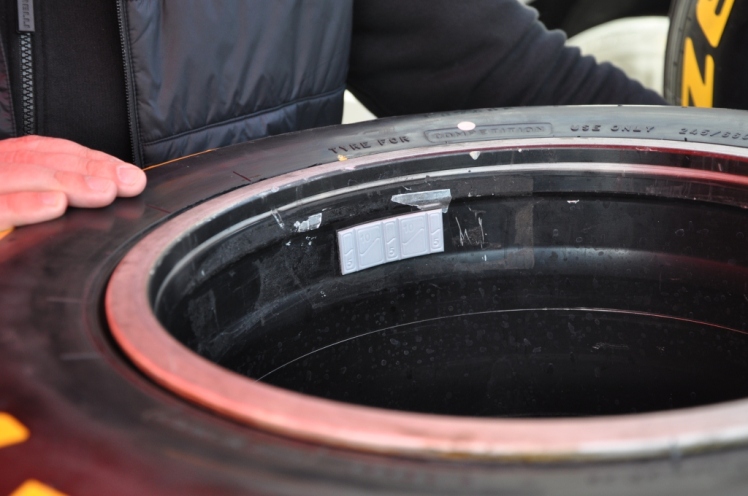 In the afternoon the team race a full race simulation. After one of the pit stops I noticed that one of the tyres had a serious flat spot that was bad enough for the wires to be poking out. As I was about to take this photo the Pirelli engineer put his hand over the area in question!

Another interesting bit of trivia that I noticed was the way the team performed front wing adjustment. They had special drivers that had a dial at the rear of them – they would dial in the number of turns they wanted the front wing changed by and when they put the driver onto the adjuster it would turn it by the exact amount. During the race simulation one of the mechanics practiced the adjustment on the spare wing in the garage. 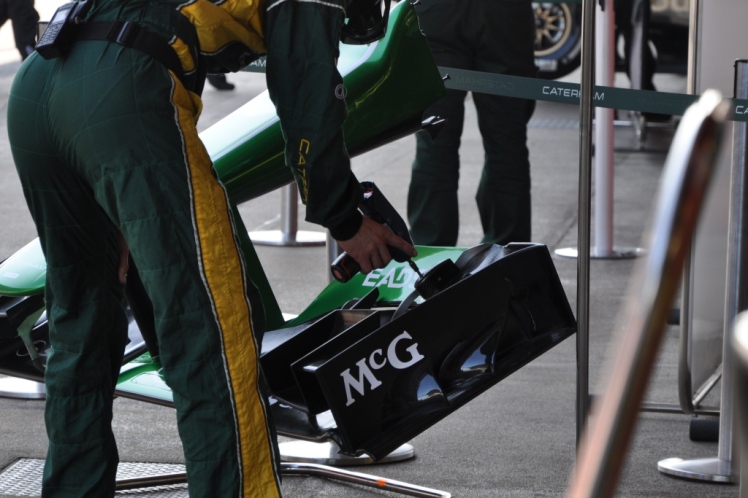 Throughout the day all the teams took considerable measures to protect their intellectual property. All the garages had screens to stop unwanted visitors poking their nose in but some teams took things a step further. Red Bull had special screens that they put on the rear of their car to cover the diffuser. Ferrari also had a rear cover as well as yellow flannels that they put on the side pods every time their car stopped in the pit lane. 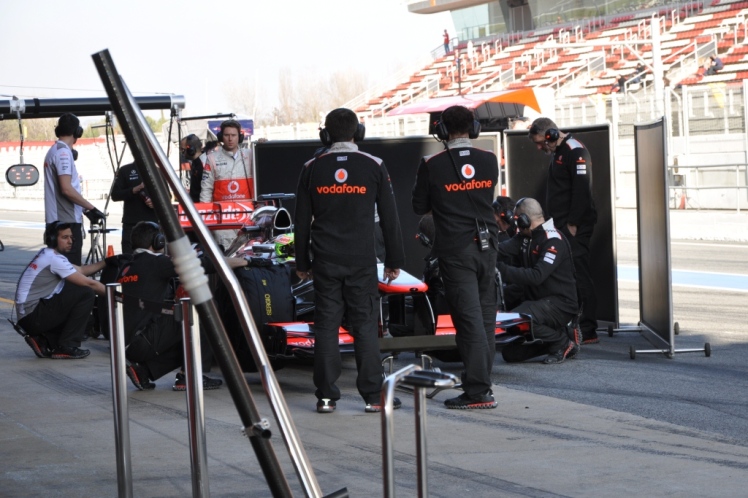 During the race simulation in the afternoon I managed to blag a radio headset in order to eavesdrop on the team’s communications. I was surprised at how little radio traffic there was – everyone in the team seemed to know what to do and they were all business with no chat whenever the car pulled into the box.

Probably the biggest highlight for me was standing on the edge of the box watching the car come in for fresh tyres during the race simulation.  I was literally a yard away from the box as the car came steaming in and the crew worked their magic at full tilt.  Watching a stop on TV is fun but being next to one is at the next level – the main thing that hits you is the noise, most of which is transmitted as vibrations through the ground and right up through your body.  I watched the first stop through the lens of the camera but all subsequent ones I just stood by in amazement as it all happened in a few seconds.

There’s no way I can begin to try to and convey the awesomeness of today’s experience apart from to say that it was off the Richter scale!

To see more photos from the day please click on one of these links:

For photos from the paddock please click on one of these links:

Please click this link for photos from Friday testing.

Other posts in this category: Factory Tours

If you enjoyed this post why not subscribe to this blog for further updates? Simply enter your email address in the box at the bottom of this page.

4 thoughts on “Visit to Caterham F1”