It was my father’s 70 birthday not too long ago and we’ve been doing quite a few motorsport related things together as part of the celebrations (some of which I have written about on here).  The final chapter of these was to get ourselves over to Silverstone for a ride in their custom built 2 seater “F1 Style” car.  With 380 bhp and weighing only 800kg (with driver and passenger) it certainly looked good on paper.  Add in proper aero  and I have to admit I had been looking forward to this for a long time.

Prior to going out in the Hypersonic we were lucky enough to be taken out for some hot laps in a stock Nissan GTR by a professional driver.  I have driven, and been driven, in some fast cars in my time but throw in someone who knows how to push a car to the very limit and it surpassed all of my expectations.  It’s no lie to say the car

was driven on the edge for the entire time we were out – the only other I have felt my insides move around like that was when I first felt the  turbos kick in on an F40 I was lucky enough to be passenger in.  That was until I went out in the Hypersonic….

The seat was as you’d expect it to be, bare with no padding whatsoever.  Climbing in was fairly easy but I wasn’t prepared for how low and stretched out I would be sitting – my legs went either side of the driver and my feet were resting on foot rests to the side of the dash!  A six point harness clamped me down into the seat and I was shown a choice of hand holds on the roll bar in front of me.  Also pointed out was a button which told the driver to slow down – not that we’d be needing it.

The car was connected to a battery pack and the engine fired into life.  Take off wasn’t as aggressive as I was expecting but as soon as were were rolling the throttle was opened.  We were starting from the National Pits and with no speed restriction we were soon hurtling to the tight right hander at the end of the pit lane.  In order to navigate it safely the driver had to brake significantly before stamping on the throttle again and joining the track.

The track was full of Silverstone’s “Experience” cars, so mainly Ferrari F430s, Nissan GTRs as well as a few Aston Martins and a single Ferrari 360.  The Hypersonic was lapping so quickly that it seemed like they were parked up on the track.  The straights were comparatively boring compared to the high speed corners.  Coming down the National Straight at full tilt, a quick dab on the brakes and we would then be hurtling round Copse corner.  I have never experienced cornering like it – I could almost feel the mechanical grip of the tyres biting into the tarmac.  The driver didn’t wait for the other cars to get out of his way – he knew how fast we could get round a corner and he’d think nothing of nipping up the inside and getting round the corner before the other car had even finished their braking.

The noise wasn’t too loud, I suspect because they have strict limits in place but the feeling of being bolted into a racing car more than made up for it.  With the engine directly behind me I could hear the air being sucked into the intake just above my head and felt a jolt in my back on every gear change.  Our trip had been previously cancelled due to a broken gearbox and now I know why – the car is driven hard and the thrill is much better for it.

My only criticism would be that it didn’t last too long, but for £65 I wasn’t expecting a full race simulation.  If you get the chance to go out in the Hypersonic I can thoroughly recommend doing so.  Now I off to search the classifieds for ex-race cars…..

If you enjoyed this post why not subscribe to this blog for further updates? Simply enter your email address in the box at the bottom of this page. 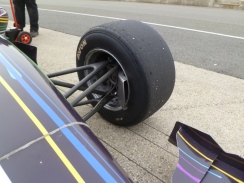 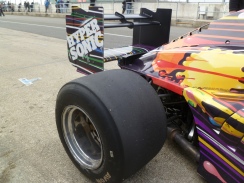 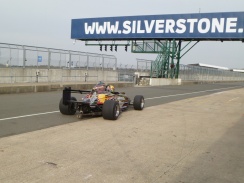 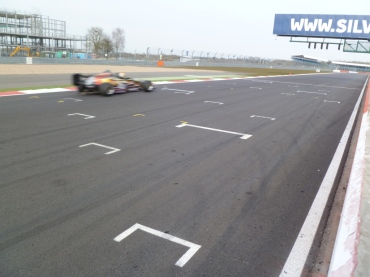