The air intake system fitted to the 360 has some really cool features built into it.  The 360 was developed in the wind tunnel at Maranello and the air intake starts just behind the door handle as the bodywork opens up into a channel to draw the air flowing over the body into the system.  It is worth noting that the standard 360 mirrors interrupt the air flowing over the side of the car and actually disrupt the air flowing into the intake.  This was rectified on the Stradale, evidenced by the thin aero stalks the carbon mirrors are fixed on (the F430 also addressed this issue by using twin stalks to mount the mirrors).  The fitment of the Stradale carbon mirrors is said to increase peak engine output by up to 20hp at top speed due to the extra air flowing into the engine.

Air enters the system through the left hand grill fitted above the rear wheel.  The air first enters a Helmholtz resonator chamber which has been carefully designed to tune the induction noise.  The chambers are different for the Modena, Spider and Challenge Stradale models, reflecting different packaging constraints and noise requirements.

The air then enters the main air intake enclosure which has two openings housing the air filters.  Once air has passed through the air filters it is channeled into the two intake tracts via the air filter covers.  These covers have velocity stacks added to the exit pipes in order to promote smooth air exiting the cover at high flow conditions (shown in the picture below).  Carbon air filter covers (both OEM and aftermarket) do not have these trumpets and I am unsure if they have any tangible benefit. 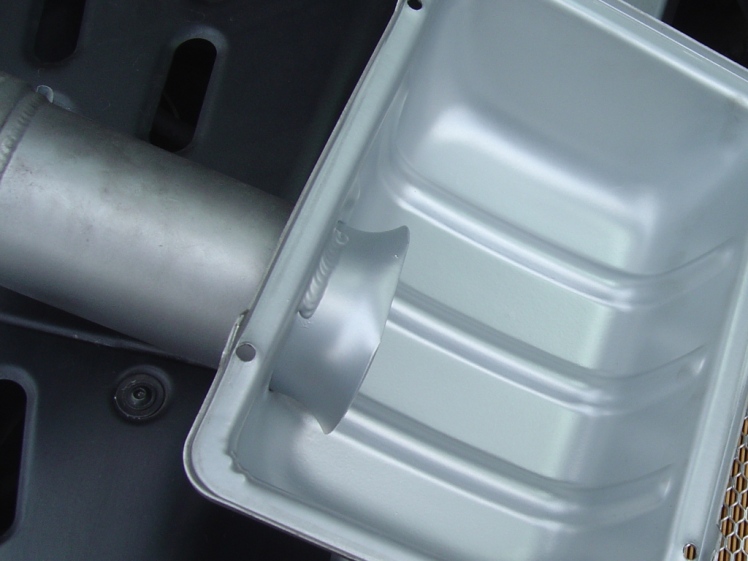 The air next passes through the air flow meters (see more on MAFs here).  The MAFs are joined to the throttle bodies by flexible “bellows”.  Some people change these bellows for fixed silicone hoses in the belief that it improves air flow into the engine.  These hoses may indeed provide a smoother path for the air to flow along but the bellows perform a vital function in allowing the distance between the engine and the air intake to vary.  The engine moves around on its mounts, especially under hard acceleration, whereas the air intake enclosure is fixed to the chassis.  Without the bellows something has got to give and will end up breaking in time – if you’re lucky it’ll be the silicone hoses but could just as easily be the very expensive throttle bodies.

Once the air has passed through the throttle bodies it enters the plenum chamber.  The purpose of the plenum chamber is provide a cushion between relatively constant flow of air through the intake and the pulsating flow into each of the eight cylinders.  It also provides an even volume of air so cylinders number 1 and 8 have the access to the same quantity of air as cylinders 4 and 5.  The plenum chamber is in fact two chambers linked by a large compensation valve.  This valve is pneumatically operated and can be either closed or open, however the exact parameters that determine its operation are a mystery to me.

The cylinders are connected to the plenum chamber by a variable length inlet manifold.  This is made from a complex aluminium casting – see the picture below for a brand new bare casting: 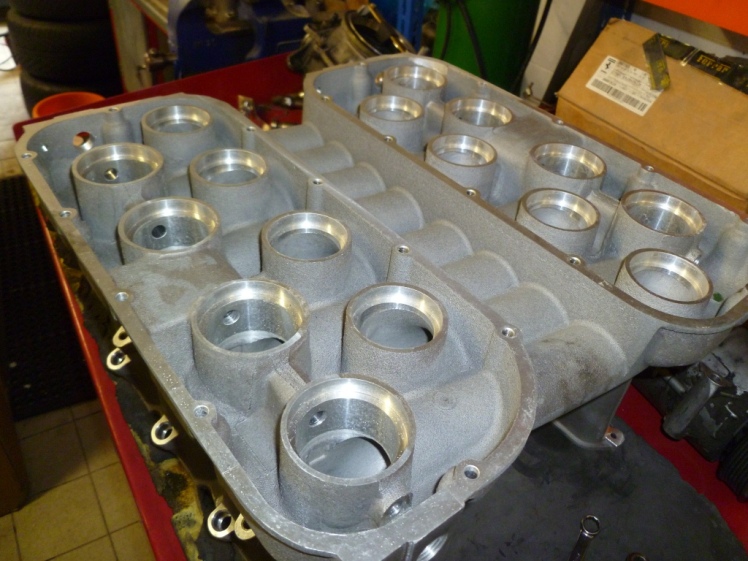 This casting contains eight intake ports of two sizes.  The larger of the ports contain butterfly valves that are operated by a pneumatic actuator.  Here you can see the valves as well as the velocity stacks that assist with the air flow into the ports: 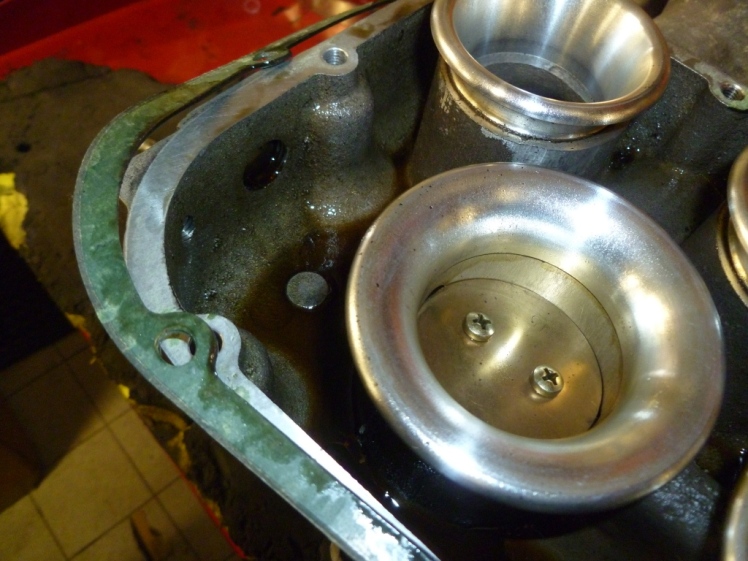 These valves are opened and closed depending on throttle position and engine speed.  At low engine speeds and throttle positions the valves remain closed and the air is forced to travel through the longer and narrower intake path as shown in yellow in the diagram below.  Forcing the air to take this path creates turbulence in the air flow and improves low down torque.  This arrangement also means that the 360 has a crossflow intake system which is important to remember when trying to diagnose and resolve MAF faults. 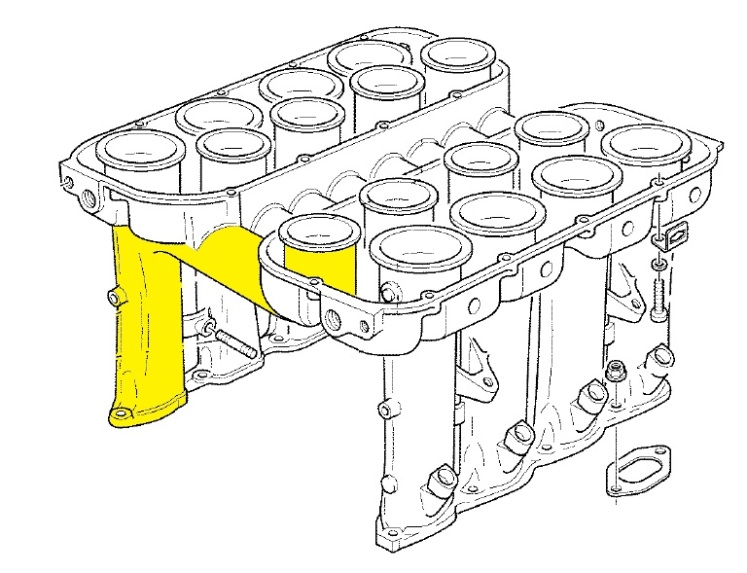 When the throttle is open more than 45% and the engine is rotating faster than 5,500 rpm, the valves open to allow air to travel through the much shorter (less than half) and wider intakes (see red in the diagram below).  This allows the most amount of air to enter the cylinders with the least resistance in order to maximise peak power. 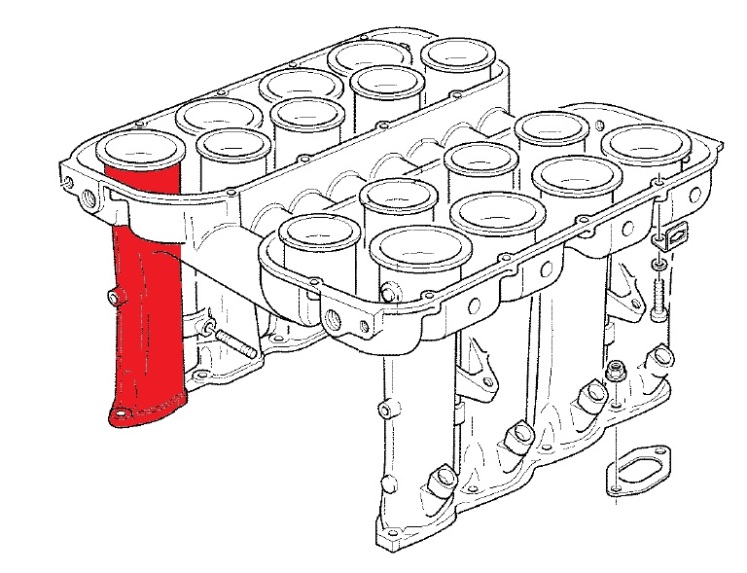 The valves inside the inlet manifold can become noisy which is often often wrongly thought to be noisy tappets or injectors.  If you have a noisy top end then a simple way to check if the intake valves are the source of the noise is to manually operate them.  The actuator lever can be accessed by reaching down between the intakes of cylinders 2 & 3 or 6 & 7.  Pull the lever towards the outside of the car – if the noise stops then the valves are the origin of the noise. 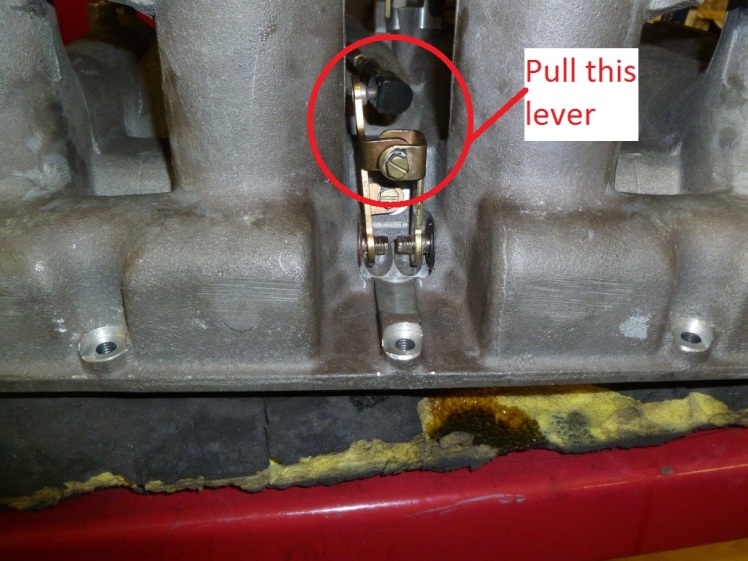 If there is excessive play in the valves, the shafts can be re-bushed however the intake manifold has to be removed from the car.  The parts are standard Weber carburetor parts and can be easily sourced.