If you’re going to do the Ferrari tour then it is worth taking in the Maserati one too.  As per Ferrari, tours are booked through your dealer.  There is a lot less to see but I enjoyed the morning at the factory immensely, not least because our tour guide was a man who had work at Maserati since 1966 and knew a lot about the company and it’s history.  The whole campus had a much more intimate feel then the very corporate feeling Ferrari.  All Maserati engines are made by Ferrari and the bodies are made at Scaglietti so there’s only the assembly to see but it did mean we could spend a lot more time on the line seeing how the cars are put together.

The tour starts in the hospitality area where a small number of current cars and other interesting historical items are on show.  The tour begins, bizarrely, in the car park.  The side of their multi-story car park  is adorned with pictures of important road and race cars from Maserati’s history and our guide spent a good deal of time telling stories behind each model.

As we moved out of the car park we saw a Quattroporte development car drive out of the main gate.  I didn’t get a long look at it but the rear appeared to be a hatchback/fastback type of arrangement.

Walking onto the production line we were met with a similar sight as at Ferrari – cars were being transported either in pincers attached to the roof or moving floors.  We were given the opportunity to walk the entire line and time didn’t seem to be an issue.  We were permitted to wait until the next driven train was married with a chassis.  Our guide seemed to know everyone in the factory and he was very busy fetching things off the line to show us.

One of the interesting discoveries for me was when I was looking at the braking systems – the discs are steel rotors with an aluminium bell housing.  Nothing new there, except these weren’t bolted together they were a one piece item (later checks found them to cost in the order of £600 each).

Next up was the testing area.  Here every car that rolls off the line is subjected to a rigorous testing procedure including body panel gap checks, rolling road tests and water ingress tests.  Once the car has been signed off here it is sent for a road test.

When we were making our way back to the hospitality area we saw a Alfa Romeo 4C prototype on its way out of the gate to be tested (the 4C is to be built by Maserati starting next year).  What struck me was the size of it (or lack of size to be precise) – it certainly looks like an interesting car.

One other place to visit if you like Maserati and are in the area is the Panini museum – they have a fantastic selection of Maserati cars as well as other marques (and they also make great cheese on site as well)!  http://www.paninimotormuseum.it/index-en.htm 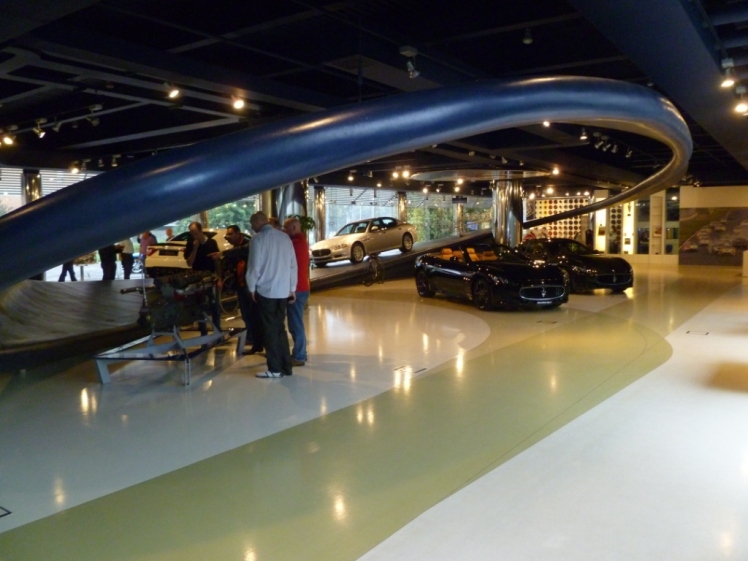 One thought on “Maserati Factory Tour”